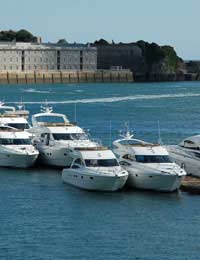 At some point seasickness affects almost everybody that steps on board a sea faring vessel - fortunately its often debilitating effects can be prevented.

The human brain is used to receiving constant update messages from each of its body’s five senses. When on board a boat affected by the movements of the waves, the brain receives a confusing mix of messages. Whilst the eyes inform the brain that the body is stable, with the feet steady on the floor and moving with the boat, the sense responsible for balance - the vestibular system in the inner ear - sends a message saying the body is moving up and down and back and forth. This confusion of the brain causes the feelings of nausea.

The traditional method of either preventing or moderating the effects of seasickness is to stay outside on deck, where holding a visual reference with the horizon, clouds or the moon will ease the brain’s confusion and the fresh bracing air will keep the body feeling healthy and open.

The reverse of this, and therefore worst situation to be in when susceptible to seasickness, is being in a contained part of the ship with no fresh air and maximum movement and minimum outside visibility. If it is essential to be below deck then the area around the vessel’s centre of gravity will endure the least feelings of motion and provide the greatest relief to the brain.

The prevention of seasickness is not just down to ones actions once onboard but also those preparatory measures undertaken before heading down the gangplank.

Passengers should be fresh and healthy, having slept well, been well hydrated and eaten a sensible well-balanced meal, avoiding fatty or rich substances or anything containing caffeine or alcohol. Those passengers not in sound physical and mental shape will be more susceptible to motion sickness.

It is also important to dress appropriately and take extra clothing as hand luggage, bearing in mind that the weather out on the sea waves is often different than that on the land, particularly in its sensitivity to whims of the wind.

Many people choose to use medicinal aids to help prevent the feelings of nausea. These could include Dramamine or the prescription drugs Promethazine and Meclizine.

The negatives of using such remedies is that they may have debilitating effects of their own, such as quickened heart rate, impaired vision and, most commonly, drowsiness. It therefore sensible not to take medication unless certain that one will suffer from the effects of seasickness. As an alternative, ginger provides an anti-nausea treatment for those who prefer natural remedies.

What are Sea Legs and Where Can You Find Them?

When somebody has got their ‘sea legs’ this means that their brain has managed to compensate for the motion of the vessel when they walk around on board, allowing them to move about unaffected by the rolling motion of the ship. Novices on the water will find themselves staggering by such movement until their brain realises what is happening and adjusts accordingly. The length of time it takes for this adjustment depends on the individual and may also be affected by the period at sea, size of the vessel and the sea conditions.

Ultimately the best method of avoiding seasickness is not to live in fear of the sickness, and alter any traditional habits eating or drinking in anticipation, but to instead stay healthy, focused on other tasks and away from areas with high movement and low visibility levels.

Coping with Man Overboard Situation
Share Your Story, Join the Discussion or Seek Advice..
The fresh air treatment is only going to work if the weather's fine, or at least not pouring, and the ship is in relatively calm water. Using drugs does work for many people, but there might be instances where you have no choice but to feel green and seasick. As to sea legs, those often take a few days, and before that you're going to feel awful. On a cruise ship, though, the boat is so stable that you often won't even feel you're on the water, so seasickness is unlikely.
Chris - 2-Jul-12 @ 10:42 AM
Title:
(never shown)
Firstname:
(never shown)
Surname:
(never shown)
Email:
(never shown)
Nickname:
(shown)
Comment:
Validate: