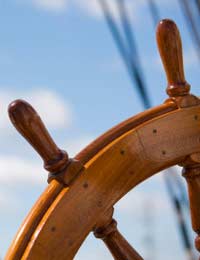 The world of sailing operates under a different code with its own rules, expressions and terminology. Familiarising yourself with some popular sailing terms is a key step in understanding the art.

There are several key terms that are worth familiarising yourself with when first entering the world of sailing. These will likely be covered in greater depth at the various beginner sailing lessons or other sailing school programmes.

Understanding the Points of Sail

With the wind playing such an all important role in the behaviour of a sailboat, it is unsurprising that wind, and in particular its direction, dominate sailing terminology and therefore comprise a vital chapter in a sailor’s handbook.

The ‘points of sail’ refer to the heading direction of the boat in relation to the wind. Each point demands a different adjustment of the sails for the most effective travel.

The two points that boats are not usually suitable for sailing are those directly facing the wind and directly pointing away in the opposite direction.

The area 45 degrees either side of the point directly facing the wind is known as the ‘no sail zone’, and it is logical why this direction is best avoided. However, for those learning to sail, it may come as a surprise that the directly downwind direction – known as the ‘run’ – is not advised. This is rarely an efficient course unless the boat adopts the special spinnaker sail.

If a boat needs to sail upwind then in order to make progress they must travel ‘close-hauled’ or on a ‘beat’, which is as close into the wind as the boat will allow. This is typically around 45 degrees from the wind direction.

The points that will allow the swiftest cruising, and enable the mainsail and jib to work well on the same side, are known as the ‘reaches’ and comprise of ‘close reach, ‘beam reach’ and ‘broad reach’:

Upwind locations are, however, not completely out of bounds for sailboats they just must employ a technique known as ‘tacking’ in order to reach their destination. This method involves sailing back and forth across the wind on a course of legs or tacks. The boat follows the close-haul point to the starboard side for a set period before altering course to the port close-haul point, thereby slowly zigzagging towards the upwind location.

The same course changing technique can be carried out downwind, only this time it is known as ‘gybing’ or ‘jibing’. In this manoeuvre the sailboat turns its stern through the wind so that the wind direction moves from one side of the vessel to the other.

Gybing is quicker and less controlled operation than tacking and to be effective requires precision, timing and good communication between crew members and helmsman. As the boom moves across the boat very rapidly and sometimes unexpectedly, it is also a more dangerous technique.

Although generally not as common as tacking it is commonplace in racing, where triangular courses marked with buoys are well suited to gybing.

The True and the Apparent Wind

At slower speeds, or when on a downwind run, there is little difference between the two, but in faster boats in good conditions judging the apparent wind and trimming the boat accordingly is very important, particularly in maximising the speed during racing competitions.