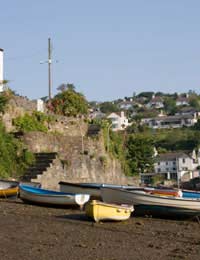 Understanding the complex patterns of weather and tides is one of the key seamanship skills and is essential for not getting caught out by unexpected weather turns when the official forecasts fail.

A Feel for the Weather

The unpredictability of the weather even to experienced forecasters means that boaters are wise to not rely too much on official predictions and instead try to understand for themselves what is happening around them, and be able to trust their own instincts.

Some seasoned skippers, for example, are known to be able to feel the rain in the air, as a result of a combination of extreme humidity, low hanging clouds and a soft wind. Boaters should take note of the advices of such veterans of the sea.

Before embarking on a voyage or a day out on the water, at least two separate weather forecasts should always been obtained both 24 hours ahead of a planned trip and then again just before leaving. Even in our advanced technological age, we are still unable to predict the weather beyond three days with any certainty.

Winds and the Beaufort Scale

Wind can be a boater’s friend or enemy – the light breezes that bring powerboaters joy are the blight of sailors. The Beaufort Scale is the original system for estimating wind strengths without the need for any specialised equipment, and was introduced in 1806 by Admiral Sir Francis Beaufort of the British navy. It is still in widespread use today particularly by recreational sailors without specialist measuring facilities.

Corresponding descriptions and photos of the sea are used to gauge the wind speed on a scale of 13 steps, from the complete calm of force 0 to the wild hurricanes of force 12.

Met maps are blank maps and tables used for recording the information from the shipping forecast to create a person synoptic chart, and are produced by the Royal Yachting Association (RYA) and Royal Meteorological Society. They are useful to have aboard on a journey as the order in which the fields are arranged on the sheet directly correlates to order in which the information is reported on the radio broadcast.

For forecasting for longer journeys information can be texted to the boater’s mobile using the Met Office’s Marinecall service.

A barometer is a measure of air pressure and can be a useful indicator of potential weather in the immediate area. As a general rule any rapid change between high and low pressure can mean either strong winds or bad weather.

Tides are the rise and fall in water levels sparked by the effects of the sun and moon’s gravity on the planet’s ocean waters, and the rotation of the Earth. Tides create currents and raise and lower the depth of the water. The tidal range is usually measured as the difference in height between the average level of high tide and low tide.

Tidal ranges can vary from as little as a foot from high to low water to, in exceptional cases, over 50 feet. Nevertheless even minimal tides can have a significant effect on boaters. In shallow areas a tidal fall of a few inches can bare hundreds of acres of bottom and make the critical difference as to whether the size of a boat will be too excessive for entering particular waters.

Nature is the Earth’s most powerful and complex force, and as boaters cannot hope to control or tame its unpredictable moods, they must instead try to respect and understand them.