Home > Hazards at Sea > The Mystery of the Bermuda Triangle 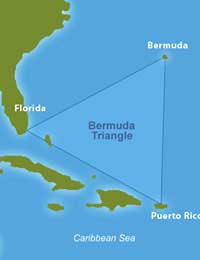 The Bermuda Triangle has been blamed for the disappearance of countless planes and ships over the years, but is there any genuine substance to the claims or is it more myth than mystery?

Flight 19 and the Birth of a Legend

The incident that gave birth to the legend of the Bermuda Triangle occurred on December 5, 1945 when five Navy planes carrying 18 crew members took off from their base in Florida on a routine navigational training mission known as Flight 19, and were never seen again.

A tragic accident later became an intriguing mystery when subsequent accounts of the incident recounted how the fleet encountered unusual phenomena and abnormal compass readings and what’s more took place on a still day under the supervision of an experienced pilot. Emphasis was also placed on the fact that the Navy’s report of the accident attributed the accident to “causes or reasons unknown”.

When similar disappearances later befell vessels and other aircraft in the same area, an article by E.V.W. Jones published through the Associated Press in 1950 hit upon the notion that the incidents were all somehow linked together by a strange and mysterious phenomenon affecting the region.

This theory promptly lit the fuse for a raft of like-minded articles, and later books, that added further fuel to the myth. Two years later George X. Sand’s ‘Sea Mystery At Our Back Door’ ascribed the disappearances to a roughly triangular shaped area bounded by the three points of Miami, Puerto Rico and Bermuda, and then in 1964 author Victor Gaddis effectively crowned the modern legend by coining the catchy and immortal name, ‘The Bermuda Triangle’.

However, rather than driven by desire to root out the truth behind the supposed mystery, such authors sought only to capture the public’s imagination by deepening it further. As a result a wild array of potential explanations were ushered in, from the vaguely plausible - compass anomalies, methane gas eruptions, freak waves – to the downright bizarre – blame being ascribed to giant sea monsters, forces both extra-terrestial and supernatural, and even the lost kingdom of Atlantis.

Those that did want to discover whether their really was a common factor in all the supposed unexplained disappearances invariably discovered that the research carried out by those evidently keen to perpetuate the myth of the Bermuda Triangle was riddled with misrepresentation of facts and even outright fabrication.

Investigations into many of the incidents associated with the Bermuda Triangle have found that there is invariably a rational explanation for each disaster, most typically being due to human error, equipment failure or natural disasters.

For example, the ‘Triangle’ commentaries about the Flight 19 incident typically fail to include vital details such as the fact that the weather became stormy, that the conversation records failed to mention any experience of magnetic problems, and also that the only experienced pilot amongst the fleet was not familiar with the south Florida area and had a history of getting lost in flight.

The veteran pilot was found to have been 50km NW from where he thought he was, and the Navy wrote “reasons unknown” in its report of the accident under the behest of the pilot’s mother, who wished to save her son’s reputation.

The strange disappearance of the British aeroplane, the Star Tiger, can be attributed to a heating failure that led to the aircraft running out of fuel and ultimately a sudden and catastrophic end.

Malfunction and accident were not unfamiliar to the operator of the flight, British South American Airways (BSAA), who in the space of three years clocked up 11 serious accidents, and lost five planes.

There are those that believe that although there may be nothing remarkable about the how these incidents occured, there is however something unusual about the frequency with which they take place in this corner of the Atlantic.

Unfortunately a rather prosaic explanation lurks behind this misconception this too. According Lloyds of London the scale of incident occurrence is not disproportionate when compared with other similarly busy shipping lanes.