Home > Ferry Travel > The Demise of the Hovercraft

The Demise of the Hovercraft 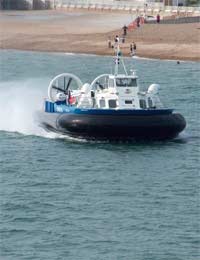 Once seen as the transport of the future, and among the fastest ships in the world, but now rarely ever seen – so what happened to Britain’s prized hovercraft?

The Future of Sea Travel

Back in the late 1960s floating across the water on a big air cushion was seen as the future of sea travel. A triumphant and stirring mix of British technology and engineering, the hovercraft is half aircraft, half ferry. It can travel over land and air on a cushion of air, propelled by four huge Rolls Royce gas turbines. It is not only fast – with speeds of up to 60 knots – but also fierce, designed to battle the whole year round through the sometimes treacherous waters of the English Channel.

Masterminded by British engineer Christopher Cockerell, the hovercraft first saw the light of day in 1959 when the first working model was produced – the Saunders Roe Nautical One (SRN1). Although a successful first Channel crossing was completed that same year, almost a further ten years passed before the hovercraft was ready to perform a regular passenger ferry service.

Under the regal moniker of ‘Princess Margaret’, the SRN4 hovercraft inaugurated a Dover to Boulogne passenger service on August 1, 1968. A year later, the Dover to Calais route was commandeered by another royal, the ‘Princess Anne’.

The Fast and Hard Working Royals

Assisted by other fleet members, the two royals proved to be a reliable, hard working pair over the subsequent three decades, building up an army of loyal fans from both sides of the Channel.

Many of these admirers were attracted by the excitement of travelling onboard a hovercraft. This was no sleek and peaceful ride, but lively experience filled with noise and wild vibration. The ‘beast’ – as it was affectionately known – would literally roar across the water.

Between the main fleet of six, million hours of engine time and a million hours of propeller time were clocked up. If they were classed as aircraft then they would be the most heavily used ever. The two original giants were only designed to put in ten years of service and ended up completing over thirty.

They were also some of the fastest sea faring craft in the world. In 1995, the Princess Anne managed to cross the Channel in 22 minutes, a record that still remains unbeaten, even underneath onboard the Eurostar.

The Demise of Hovercraft Travel

But if the hovercraft was so great then why did a life so full of promise end ignominiously in 2000, when the giant hovercraft made its final voyage across the Channel?

Just like its high-flying cousin of innovation the Concorde, it was not bad design that ultimately deflated the hovercraft, but economics. It just wasn’t cost efficient to run anymore, particularly as the cross-Channel business was suffering through falling passenger numbers brought on by the abolition of duty-free sales in 1999.

The main hovercraft operator Hoverspeed retired its pioneering fleet on October 1, 2000, and replaced them with Seacat Catamarans. The replacements are sleeker, less noisy, offer more passenger comforts and, although ten minutes slower than their predecessors, the Seacats can carry twice as many cars and nearly double the number of passengers. In the world of business, efficiency ultimately wins out over innovation. And although once seen as a vision of the future, they were limited by being stuck in the past. They were designed for an era when people travelled without their cars.

Is There a Future for the Hovercraft?

At present there is only one passenger hovercraft service operating in the British Isles – Hovertravel’s smaller models travel between Portsmouth and Ryde, on the Isle of Wight – but this might soon change.

There has been talk in the last few years of the two legendary 325-tonne hovercraft being acquired by a Canadian firm to operate a car and passenger service across Lake Ontario. After all the hovercraft is not, it’s just not suitable for Channel crossing anymore.